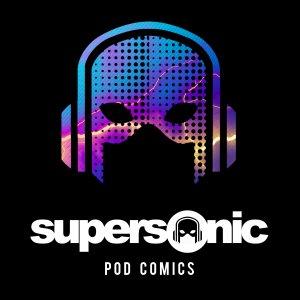 
By Ben Avery, JS Earls, and the SUPERSONIC Team

PREVIOUSLY ON CODENAME: SUPERFORCE • Our team of super-powered agents – VOX, the Russian who turns light into sonic blasts; ROTAM, the bionic French racer who rolls on orbs; VICUS, the American gunslinger with trick bullets; MR MATRIX,

Once he was Michael. But that was Before. Now he is something . . . different. And because of that, he finds himself on a mission. A mission he hopes the ones he calls his friends will help him with. The Man-God. The Alien. The Robot. The Monster.

Ray, the mechanical man, takes the spotlight as new details about possible nefarious doings get revealed, as does some insight into the inner workings of a mechanical man . . . The Man-God. The Alien. The Robot. The Monster. Together, they are family.

Previously on SUMO GIRL… Sumo-fan HOJO GOZEN is allergic to almost everything, so her inventor Father built her a robot cat helper — TORA — and a Bubble-Suit to protect her. Then, HOJO’s Father went missing just as the gangster SHIKKŌ-SHA came looking ...

PREVIOUSLY ON CODENAME SUPERFORCE: Our team of super-powered agents — VOX, the Russian who turns light into sonic blasts; ROTAM, the bionic French racer who rolls on orbs; VICUS, the American gunslinger with trick bullets; DRACO the Chinese flyer who b...

CAST & CREW Q&A #1: Who Is Your Favorite Superhero?

Hello, friends! We’re happy to present to you a special “get to know us” episode. This is possibly the beginning of a new series of supporter exclusive episodes, like Behind the Pods, that allow you to hear from the cast and crew.

FROM THE JOURNALS OF KID RAPTOR (a Randoms Story) – SPC018

On the night of the Event, 42 people’s lives were changed. This is one of their stories . . . Jim Anderson. Community college student. Lives at home. Just wandering through life. Until the Event. When light fell to the earth and knocked him to the grou...

PREVIOUSLY ON THE MARK: Toby Cain has a power. The ability to turn anyone he touches into a superhero. But after his partner, Denise Clarkson, was wounded on a mission, he vowed never to put someone in danger again.

WE’RE BACK! A CONVERSATION WITH BEN AND JS – Behind the Pods #3

We’re back!!!  Our newest episode, THE RANDOMS #3, has (finally) been released and we’re moving back into a regular schedule! And that means we’re jumping back into BEHIND THE PODS as well. Behind the Pods is a Supporter Exclusive series,

PREVIOUSLY ON THE RANDOMS: On the night an unknown object was destroyed in space, the whole world was watching. But some random people didn’t just see it happen, they were changed by it. It gave Graham Walker the ability to fly with wings of fire,

PREVIOUSLY ON CODENAME: SUPERFORCE: In the future, the agents of Superforce will be held captive and questioned by a UN investigator named Moebius. He has revealed that – contrary to what they were told – Superforce does NOT work for the UN and their l...

In this 96th episode of Maria Cain’s popular podcast, Maria begins to explore the hot topic of superheroes. First, she talks about the superhero that’s in her own hometown and then she opens up the mic to some of the listeners who were listening live t...

PREVIOUSLY ON SUMO GIRL: Hojo Gozen is allergic to almost everything. Luckily, Hojo’s inventor father built her a robot cat (Tora) to have as a friend and a Bubble-Suit to protect her! Unluckily, Hojo’s father has gone missing and now a gangster named ...

PREVIOUSLY ON THE MARK: Toby Cain and Denise Clarkson took on a new villain in the form of the mysterious Destiny, an assassin who forced them to travel a dark path using kidnapping victims as bait. And at the end of that path: a bullet,

When Graham Walker got the power to create flaming wings, allowing him to fly and gain great strength, he also got the power to detect others like him, leading him to Jenna Kirkwood. But as they develop the skills to use their powers,

Welcome to the world of super-powered espionage, where little is as it seems and much has yet to be uncovered. IN THE NEAR FUTURE, members of Superforce are held captive and questioned by a man named Moebius. But…how did they get there?

Hojo Gozen lived her whole life indoors due to severe immunodeficiency. Her inventor father built her an amazing robotic cat and now he made her something even more special: a bubble-like exo-suit that allows her to go out into the world.

Toby and Denise have continued their war on crime, but Mr. Boyles is not taking their meddling well. As things escalate, the duo must face a deadly new threat. Tune in next week for SUMO GIRL episode 2, “Shonichi: the First Day” This podcast is made po...

Graham Walker’s life was turned upside-down the night the interstellar object was destroyed. Strange things are happening to him. And in his search for answers, he’s about to find out . . . he’s not alone. Tune in next week for THE MARK #2: “Your Frien...

When the world faces great danger, the world needs great heroes. And so the international team, codename “SUPERFORCE”, was created: Vox, the giant Russian warrior who turns light into sonic blasts; Diem, a British special agent who controls time; Draco...

Hojo Gozen lives a life in a safe,  sterile home because she has severe immunodeficiency. Her inventor father already built her an amazing robotic cat, but now he’s made her something even more special: a bubble-like exo-suit designed to allow his daug...

Toby Cain doesn’t have powers, he gives them. He and his partner, martial arts instructor Denise Clarkson, have been waging a two person war on crime, but the target of most of their activity has decided to fight back.

The SUPERSONIC Pod Comics universe begins here! Red, White, and Blue, the United States’ super team, has a mission, but the tracks lead them to something unexpected . . . This story sets up a bold new series of superhero storytelling — SUPERSONIC Pod C...