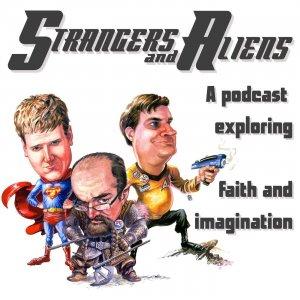 Strangers and Aliens: Science Fiction & Fantasy from a Christian Perspective

There are a lot of opinions about the latest Marvel movie, DOCTOR STRANGE AND THE MULTIVERSE OF MADNESS. Most of them are valid and understandable, whether extremely positive or extremely negative. Case in point: Ben really liked the movie, and Evan really did not. That’s NOT the reason Evan is …

This is the weekend we celebrate Easter, and in this episode we release an episode that is meant to encourage us to take the time to reflect on Easter, Good Friday, and the Last Supper. Ben is joined by his family in a series of readings and writings about some …

MORBIUS has arrived! Finally! Ben goes solo on a spoiler-free review . . . Sort of a preview of his thoughts on the movie, Evan and Steve told Ben they couldn’t get to this movie, and Ben told them that it was ok. There wasn’t the same kind of urgency …

What happens when . . . Ben, Steve, and Evan have a hard time getting together to record? Ben’s been rewatching Lord of the Rings? Ben’s been studying Simon of Cyrene? Ben wants to get some episodes out? Ben has a huge editing job with his and Evan’s THE BATMAN …

The moon is falling . . . and they made a movie. Was it worth seeing? Was it worth making? Ben, Evan, and John Harju went to see this disaster flick. They were all surprised. John was surprised it wasn’t a comedy…Evan was surprised that he loved it so much…Ben …

In the early 2000s, Marvel tried an experiment – restart the stories of fan favorite characters in a new universe. A universe that does not have all the baggage of decades and decades of thousands of issues. A universe that is accessible to new readers and attractive to young readers. …

2021 was an interesting year for pop culture. We take a look at the movies we saw and some of the other pop culture items (TV and books) we took in during the past year. We used Letterboxd as a partial guide for this, taking Evan’s movie diary list for …

We moved to a new server, which resulted in the loss of this post . . . we apologize for any inconvenience. DUNE hit screens big and small, and it made a huge impact on us! Ben and Steve discuss the movie, and its story, music, history, and style.

Ben and Steve got together to talk about DUNE Part One! Conversation topics include:DUNE 1984The Sci-Fi Channel’s DUNE mini-seriesThe BooksFoundationBen’s emotional reaction to the end of the movieSteve’s initial viewing without sound . . . on purposeJohn CarterStar WarsThe call to lamentation Is this the best sci-fi movie ever made? …

Ben and Evan take a road trip to see the latest MCU movie, ETERNALS!!! It’s a movie that tries hard to go big, but does it succeed? PART ONE: The Trip There – talking about expectations and other random thingsPART TWO: The Parking Lot – spoiler free review of the …

To celebrate 10 years of the Strangers and Aliens podcast, we’re reposting our first episode! In this episode, Dr. Jayce, Steve, and Ben talk about the question: “Why Sci-Fi?” This is the episode that started it all. Well, started it all in this corner of the woods, anyway. This is …

The CUBE franchise consists of three movies from the 90s and early 2000s. Each of these movies features strangers . . . moving through a strange setting consisting of rooms that are CUBES . . . and so

Steve and Ben explore Venus via the second book in C.S. Lewis’ celebrated “Space Trilogy,” Perelandra. Published in 1943, Perelandra is the story of a man, Ransom, who is transported to Venus and thru

A road trip to see Shang-Chi, featuring Ben, Evan, and Evan’s sister-in-law! Road trips include three segments: spoiler free discussion on the trip to the theater about what we’re expecting; a spoiler

Ben and Evan reunite for a good ol’ fashioned ROAD TRIP EPISODE!!! The movie this time? FREE GUY! An original concept, science fiction movie? In the summer? More importantly . . . is it any good?

Jackie Brown’s Four Loves: An exploration of the characters and relationships of Quentin Tarantino’s Jackie Brown through C.S. Lewis’ The Four Loves – S&A367

A few years back, Ben had the chance to write an essay for the book “Tarantino And Theology” (edited by Jonathan and Jerry Walls). The result was a chance for Ben to dive into his favorite Tarantino m

SHADOW and SUBSTANCE 2: “Probe 7 Over and Out” and “The Self-Improvement of Salvadore Ross” – SA366

We continue our series about THE TWILIGHT ZONE (that started in 2013 . . . and only has one other episode in the series) by covering two season five episodes of the show: “Probe 7 Over and Out” and “T

“Cold Equations” by X-Minus 1 and STOWAWAY by Netflix – SA365

This episode is why we created Strangers and Aliens! In this episode we: Explore a classic sci-fi story (“The Cold Equations” by Tom Godwin)! Review a new sci-fi movie (STOWAWAY, on Netflix now – don’

Epic Stories from the Bible that Should Be Movies – SA364

Ben and Steve are joined by frequent guest host Nathan Marchand to battle each other about how good Godzilla Vs. Kong was! Where did they watch it? (At the BOX OFFICE, or the HOME Box Office???) Did t

Just before we started recording about another topic, we became aware of some HUGE announcements Disney had made about upcoming Disney Plus series and also some movies and some interesting Hulu series. So we called an audible and switched our plans .

THE THING (from Another World) Franchise – SA352

Ben is joined by John Hart for their semi-annual Halloween exploration of some classic horror movies! This time: THE THING. Starting with THE THING FROM ANOTHER WORLD and then going into the remake THE THING from 1982 (the most famous in the franchise)...

A good theme song may not save a TV show from being bad, but it definitely makes it more memorable. For this episode, we nominate our favorite themes songs and bring in some listener nominations, and we tally the votes to come up with the official Stra...

Ben and Evan ventured to the theaters to see Tenet, the movie they THOUGHT would be the first movie back in theaters. Instead, Ben had already seen a few movies and Evan went to a movie theater on the east coast . . . so Tenet was not the road …

Ben heads out on what could be an excellent adventure . . . or a bonus journey. This road trip has almost as many twists and turns as the movie he’s seeing, from the question of if he will even GET to the movie to the possibility of not seeing …

Ben heads out to the first new release movie he’s seen in theaters since the beginning of the shut down for the pandemic. After seeing The Empire Strikes Back (and The Greatest Showman), he gets to see a new movie that has been waiting for release for ...

Ben heads out to his first movie in theaters since the beginning of the shut down for the pandemic. It’s a different experience, with the masks requirements and the like, but it’s also a familiar experience, being a movie he’s seen many, many times .

Stuff We Consumed During the Pandemic – SA346

For some, the pandemic has given the opportunity to read and watch more things than usual. In this episode, we discuss some of the new (to us) media we have read, watched, and listened to.

“From the vault,” so to speak, this episode is actually a couple months old and was the last movie Ben saw before theaters closed down. King Kong (1933) was a movie that changed everything and the results are still being felt today.

Pilot Season – when studios create the first episode of a new show and shop it around in hopes that a network will pick up the series for a full season . . . For us, it’s a fun exercise in checking out a new series and exposing ourselves to …

Ben, Evan, and guest host Nathan Marchand take on some appearances of Superman in comics and animation, wherein HE takes on some giant monsters. From the comics of the 90s to the cartoons of the 40s to the animated series of the 90s,

Watching COLOR OUT OF SPACE with John Harju – SA339

Ben is joined by horror aficionado and frequent guest host, John Harju, to take about the new HP Lovecraft adaptation, COLOR OUT OF SPACE. Is Nicholas Cage bonkers in the GOOD sense? Is the movie good sci-fi horror, or cheesy b-movie stuff?

Recorded a while ago and lost in the shuffle, this episode completes the CW’s Crisis on Infinite Earths mega-crossover. It’s a game changer in many ways, and not just how the plot affects the CW’s series. There’s more cameos and more surprises and more...

With Frozen II being released early to Disney+, Evan, Ben, and Steve decided that this was as good a time as any to check out the franchise . . . especially since Evan has been wanting to do a Frozen episode for a long time and Ben was just dragging …

Ben, Evan, and Doug (Ben’s youngest) head out on a roadtrip to see SONIC THE HEDGEHOG the movie . . . Is it as bad as so many videogame movies tend to be? Does it rise above? Is Sonic able to outrun the bad press that came with those original …

And so the day has come to talk of LAST year. From 1979 to 2019, we’ve taken a look at sci-fi and fantasy cinema over the decades and while we didn’t know the focus or the title of this episode until it developed in our conversation, last year still had …

The promised follow up to episode 328 – when we talked about just the first episode of The Mandalorian. It’s thumbs up all around, but some are more enthusiastic than others as Ben, Evan, and Steve discuss the merits of this western in space . . .

Venturing to just a decade ago, Ben, Evan and Steve reminisce about Avatar, Star Trek, Transformers, Terminator, 2012 and MORE big movies . . . along with some of the smaller movies that were made possible because of the lower cost for effects like the...

The CW has aired the first three episodes of the world’s biggest television crossover and we’re taking a look! From the CW’s current series to Christopher Reeves/Brandon Routh’s Superman to the 1990’s Flash,

We take a look back to 1999, a year filled with BIG money makers with BIG special FX! From The Matrix to Episode I to Toy Story 2 to Wing Commander to The Mummy, we take a trip down memory lane in a year that wasn’t the first year to …

NOTE: This episode starts with non-spoiler discussion of The Mandalorian. The spoiler-filled discussion is clearly marked . . . by our usual spoiler organ. Disney+ has arrived, bringing with it an open vault of old and new television and movies.

It’s a look back at 1989, a year filled with big money makers in the theaters – and a LOT of franchise connections: from the beginning of the Batman movie series to the fifth Trek film to the third in the Indiana Jones series to Ghostbusters and Back t...