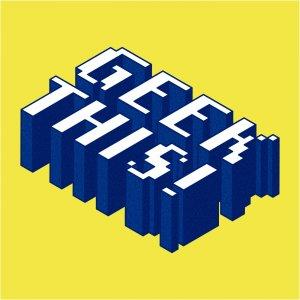 A Decade of Geek This! A Penultimate Goodbye

<p>It’s time to make <em>that</em> episode. The one where we lay the show to rest. It’s not the <em>final</em> goodbye, just because we really want both Dave and David to say goodbye together. In this episode, Dave gives shares why <em>Geek This!</em> had to end and what could be on the horizon.</p>

<p>It’s been a week since I got my Xbox Series S and I thought I’d talk about it. This one’s rambly, like always, but in the near future I’m hoping to have some friends – new and old – join me in a discussion about all three of the new generation of consoles!</p>

Pulling Back The Curtain: Thoughts on the Future of Geek This!

<p>David Hunt and I are having discussions on bringing the podcast back! I decided to sit down behind the microphone by myself to share my thoughts, give a glimpse of what may be coming and why it matters. I’ve also asked for your input as a listener, so please let me know by getting in touch via <a href="https://www.geekthispodcast.com/contact/">the contact form</a> or social media! My Twitter is <a href="https://twitter.com/mrdaveclements">@mrdaveclements</a> and that’s a good place to find me on the internet.</p> <p>Can’t wait to start things up again and hear your feedback and ideas!</p> <ul><li>Contact Form: https://www.geekthispodcast.com/contact/</li> <li>Twitter: https://twitter.com/mrdaveclements</li> </ul>

A lot of us are stuck at home right now and it might be rough for you. For me, there's not a lot of difference in my day-to-day, but the current situation can take its toll, for sure, no matter who you are. That said,

<p>I had some things on my mind that I felt the need to share regarding the way we, as pop culture fans, handle changes to franchises and characters we love. I hope you enjoy this impromptu rant. I’d love to know what you think, too! Let me know on Twitter: <a href="https://twitter.com/mrdaveclements">https://twitter.com/mrdaveclements</a></p> <p>Thanks for listening.</p>

Two companies stand at the forefront of comics book publishing. While this is common knowledge, a good majority of readers may not have experienced the seminal issues that laid so much of the groundwork for what would come in the 80+ years that were to...

As we enter the Christmas season, it was only fitting to review some of my favorite heist movies. It is the biggest time of year for consumerism, so why not celebrate like this!? For my first installment of Heistmas, I'm talking about Ocean's Eleven,

With the recent release of El Camino: A Breaking Bad Movie on Netflix, I decided it was time to share my impression of Breaking Bad as whole, with a brief overview of the show, touching on Better Call Saul, and a short piece on El Camino itself.

The Golden Age: An Introduction

Jerry Siegel and Joe Shuster brought the superhero comic into the mainstream when they debuted Superman's story in 1938 with Action Comics #1. In fact, they launched what would become the Golden Age of superhero comics, but what does that mean exactly?

Golden. Silver. Bronze. Modern. - All of these are eras in comic book history that had their own stories to tell and over the course of the last 80 years, there have been hundreds of thousands of issues published between the main two publishing compan...

It only took $72 billion dollars to bring the X-Men and Fantastic Four rights to Disney. So what’s next and what could the impact be on Disney’s new intellectual properties? - At the end of 2017, a battle began for the acquisition of rights to many of...

Maybe This Isn’t For You

Taking a closer look at the new "Avengers: Endgame" trailer.

Chucky the Doll terrified me on multiple levels as a kid, so it took a lot of psyching myself up in order to watch Child's Play. I have to say that I’m very glad I did, because I overcame my fear and laughed at myself in the process. Also,

David Hunt returns, along with Michael Myers, as we chat about the 2004 modern zombie classic, Shaun of the Dead. After that, we jump into a conversation about our recent Halloween double-feature! Every time David is on the show,

Ghouls, ghosts, gasps, and superheroes are all part of DC Comics' Halloween-inspired 80-page Giant, which is the focus of this week's episode. Also, I bring back the Pull List segment and let you know what comics I'm reading this week!

For the last couple of years, Hulu has showcased some of the best (and worst) horror films. This year they take it one step further by focusing on shorts created by independent film makers in partnership with Fox Network Group’s content studio, All City.

It's October, the podcast is back, and it's that time of the year where we all just want something spooky to watch. This week, I'm starting off the season right by talking a little about a show from my childhood - and possibly yours - Are You Afraid of...

RPG with Me (Pilot)

This week, I'm jumping all into my newfound fascination for role-playing games with a special release of the pilot episode of RPG with Me, a new podcast I'm doing with my daughters. I hope you enjoy it!

It's the week after San Diego Comic-Con and we've got trailers! Why not spend the entire episode giving my initial reactions?!

A BTS look at the show as we continue to celebrate 100 episodes.

You'll never know how grateful I am that you listen. Thank you all so very much for 100 episodes! There's still more to come!

It's one of the biggest video games out there right now: Fortnite. I talk about my experience with the game and the following news stories in this week's episode.

It's another hard-hitting episode as I give my opinion on the recent news surrounding Chris Hardwick and Chloe Dykstra, as well as share the way the writers of Infinity War would fix the DCEU.

Geoff Johns steps down as DC Comics Chief Creative Officer and I end the episode with a discussion about the serious issue of depression.

GEEK THIS! is back from a short hiatus! The Toys That Made us could easily be marketed solely to collectors, but for me, there was a little bit of nostalgia, even with the good amount of toys that I never played with. I’m a fan of history,

Yes, the show is on hiatus for another week or so, but we absolutely had to get together and talk about Deadpool 2! David Hunt and Mike Kostrewa return for the discussion, which has a very brief non-spoiler section before we dive in head-long.

This week we re-assembled our personal team of Avengers to talk about Infinity War. It's a longer episode (with some audio glitches, sorry) featuring David Hunt and Mike Kostrewa back behind the microphones again.

In the last two episodes, I’ve been sharing pieces of lore surrounding Avengers: Infinity War, which is the culmination of 10 years and 18 films within the Marvel Cinematic Universe. Today, in the third and final part of my Road to Infinity War series,...

The Infinity Gems power the Infinity Gauntlet and as you might expect, they've have switched hands a time or two. The real question, though, is "Where did they come from?"

The Infinity Gauntlet has had an interesting existence since it debuted in 1990. We’ve seen Thanos wearing it in the Infinity War trailer but that doesn’t mean someone else won’t get their hand into it. We’ll have to see.

Stan Lee gets his blood stolen, Antonio Banderas becomes an X-Man, and Thanos demands your silence!

The upcoming X-Men movies continue to get shuffled, a Han Solo keeps the drama coming, and Pacific Rim might just be crossing over with Godzilla and friends.

Take a trip back to the 1800's as I review the animated adaptation of the original Elseworlds story, Gotham By Gaslight, in this shorter episode.

Wolverine Has A Podcast

An astronaut named Gary and his planet-destroying sidekick called Mooncake embark on serialized journeys through space in order to unlock the mystery of where the universe actually ends and if it actually does exist.

Black Panther has been a huge box office success and we've seen it twice. Let's talk about it.

Netflix’s new show, Altered Carbon, is based on a 2002 book by Richard Morgan. The story is set in a dystopian world that feels similar to the cyberpunk style we see in Blade Runner.

This past weekend millions of people chose to watch two sports teams duke it out in hopes to take home some jewelry. I personally don’t pay any attention to sports of any kind, but I do know that the first Sunday in February means it’s time to watch so...

Comedians In Cars Getting Coffee

Jerry Seinfeld is a household name thanks to his TV show, Seinfeld, that ran from 1989-1998 on NBC. Oddly enough, he didn’t really do a lot of well-known work outside of his stand-up career and guest appearances.

Why Do I Hate DC Comics?

My loathing for DC Comics has been brought up a couple of times with friends and I’ve never truly been able to explain why I might hate them. So, on this episode I want to explain my point of view and how I’m going to remedy the issue.

Today I’m covering Paper Girls by Brian K Vaughan. This series (which is still ongoing at the time of this recording) debuted in October 2015, so I am absolutely late to the party here and I’m so sorry that I am.

Back in episode 59 I gave my initial impression of YouTube’s premium “YouTube Red” service. Overall, I wasn’t impressed, but after a year and 20 episodes – and getting access to a new 3-month trial – I wanted to revisit the service and see what had cha...

NBC's Hannibal is available on Amazon Prime Video and made quite the impact on Dave.

Last week on the show I shared a list of 12 pieces of entertainment I want to experience next year. This week I want to reflect on 2017 and share some info with you about the show.

Forget New Year resolutions! I'm going to be tackling a list of 12 things to experience in 2018.

In the latest installment of the DCEU, Zack Snyder brings Batman, Wonder Woman, The Flash, Aquaman, and Cyborg together to take down Steppenwolf before he can bring an end to human civilization.

As much as I like Thor, the movies simply weren’t clicking for me. Then I saw the first trailer for Ragnarok.

What secret connection do both Batman and The Joker share with a strange and mysterious young girl? After she’s kidnapped by The Joker, Batman must plunge deep into the underworld of Gotham City and race against time to find out where she’s being held....